If you would like to extend your stay in Poland and explore the beautiful country, we are offering some tours after the conference.

When you register for the conference and express your interest in tourist offer, you will receive an e-mail with a further Tour Booking instruction.  If you have already registered and have not received the booking instraction, please contact euripaforum2021@euripapolska.org.pl and we will send this to you.

Booking must be made by Monday 9th August 2021. Kindly note that minimum numbers must be met in order for the tours to take place.  If you change your mind about the tour, please let us know as soon as possible. If the tour you choose reaches minimum numbers, we will be in touch regarding the payment.  Payment will be due as soon as we confirm the tour.

There are two separate trips:
1. to Warsaw – the capital of Poland
2. to Białowieża National Park

Interested participants will have to choose one of the option.

Option 1 – WARSAW – the capital of Poland 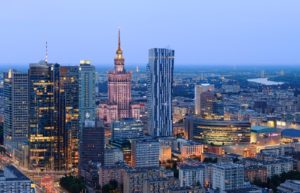 Dinner at a restaurant in the old town.

Accommodation at the hotel.

The Warsaw Rising Museum – is a tribue to a Polish nation and all the insurgents and people who fought and sacrificed their lives for Poland. Museum’s collection shows not only the history and course of the Warsaw uprising but also years of Nazi occupation, the international situation during and after the war and of the fate of insurgents in post-war, communist Poland. The museum occupies an area 3000 square meters and owns thousanda of display units, photos, videos, letters, maps and biographical information. Metal monument, which runs through the middle of the museum holds a calendar of the uprising. From inside of the monument, you can hear the sound of bullets and explosions, snogs, prayers and broadcasts of “Blyskawica” radio station.

The Royal Palace and Park “Lazienki Krolewskie” (from outside) – One of most beautiful palace and garden complexes in Europe, created in the 17th. In the old days, kings were using this densely woodes area for hunting. The last king of Poland Staniaslaw August Poniatowski, devotee of art, transformed it into the biggest and the most beautiful garden in Warsaw – The Royal Baths Park. The unusual name of the park stems from the baths which were were rebuilt into a palace. Among other historic building, the most important one is a royal residence – Palace on the Isle.  Next to the palace, there is a Teathre on the Isle. Other places which are worth visiting is Myslewicki Palace, home of royal courtiers, The Old Orangery, Guardhouses, The Little White House and and the most famous statue in Warsaw of Fryderyk Chopin, under which Chopin concerts take place in summer  (guided tours of the park from the outside).

Experience nature at its best and stand face to face with the king of the forest – the bison! Białowieża National Park is the oldest national park in Poland, one of the oldest in Europe and the only natural UNESCO site in our country.

The open-air museum in Ciechanowiec is part of the Agricultural Museum of priest Christopher Kluka in Ciechanowiec. The museum’s seat is located in a charming manor next to the museum palace. The complex consists of: a classical palace (rebuilt from war damage in 1966–1969), an outbuilding, stables, a coach house, an active water mill, a forester’s lodge. 43 historic wooden architecture objects were collected in the ethnographic park (open-air museum) created within the complex.

Bialowieża National Park is a real phenomenon at a European level. The oldest national park in Poland and one of the oldest in Europe has an extremely diverse variety of flora and fauna. In the forest you will find a whole bunch of plants and animals that occur nowhere else. According to specialists, Białowieża Forest is home to 25,000 species of animals and more than 1,000 species of plants. If you want to experience nature at its best and see what the world untouched by civilization looks like.

✓Russian tsars. As its name suggests, there used to be a palace in this area. If you are lucky enough you may encounter wild animals like deer, wild boar or fox while walking in the park.

✓The European Bison Show reserve – No trip to Białowieża Forest would be complete without a visit to the European bison Show Reserve. Despite its name, the reserve is inhabited not only by bisons, also called the kings of Bialowieza, but also several other species. Deers, elks, wild boars, wolves, tarpans, Polish horses, lynx, żubron (hybryd of bison and domestic cattle) live in this area in semi-natural conditions.

✓Palace Park – This glorious garden located in the heart of the wild forest served as a hunting residence of the Russian tsars. As its name suggests, there used to be a palace in this area. If you are lucky enough you may encounter wild animals like deer, wild boar or fox while walking in the park.

✓Orthodox Parish of St. Nicholas – Built in the late XIX century, the church impresses with its red brick architecture. It was founded by tsar Alexander III and served for a long time as a tsar’s private temple. The interior is decorated with a beautiful porcelain iconostasis, the only one of its kind in Poland.

✓Nature and Forest Museum in Białowieża in the Palace Park